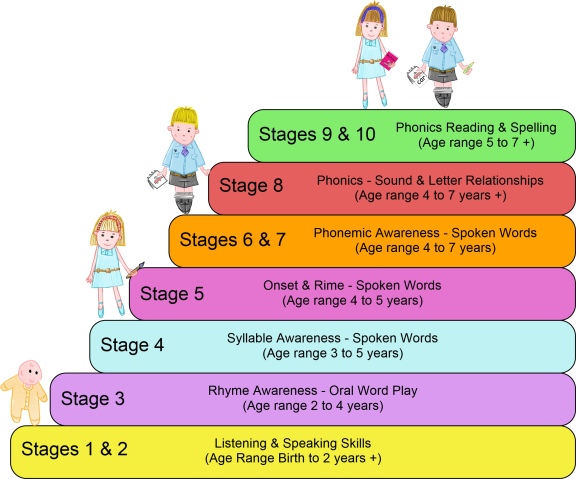 Phonics is stage 8 of our phonological awareness development, so what comes before?

Pre-phonics skills are those a child learns as they develop through the phonological awareness stages 1 to 7. Throughout this time they are continually developing their understanding and knowledge of our spoken language as well as other communication forms, such as gestures, facial expressions, body language and social conventions.

Speaking and listening skills play a vital role in helping a child develop their phonics knowledge, as they need to be exposed to a wide and varied vocabulary that allows them to hear and use the range of sounds that form our language.

Being exposed to a greater range of sound experiences helps a child to develop their awareness of the sounds around them. The more they hear, the more associations they can make to those sounds (what they see, feel, experience), the greater their ability to distinguish between them. This skill becomes important later on as they begin to isolate individual words in sentences, being able to distinguish between words that sound similar such as dog and hog.

Through listening and speaking games and activities a child is exposed to new vocabulary, as well as learning to play with the sounds in their language. This helps them to remember how the sounds feel when they make them as well as how they sound in isolation and when combined with other sounds.

Scientist believe a child’s sound awareness begins before they are born; at about 24 weeks, which highlights the importance of sound awareness, including environmental and speech sounds, as part of our instinctive natural development.

To find out more about the different developmental stages of a child’s phonological awareness click here.